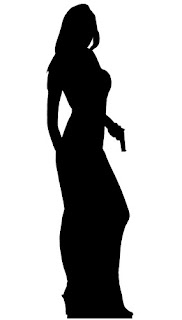 The airfield was also suggested by the "Covetous Poet's" add on "Spy Genre Pack" as a Secret Base.

We were in a bad spot here. I had no firm idea how we were going to get out of it. I asked "Mythic" if when we arrived if I saw any possibility for escape. I set the odds almost as high as they'd go and STILL got a "Yes"!  I had raised the "Chaos Factor" a couple of times now, I think to about an "8", so wild, improbable things were going to be more likely by this point.

HOWEVER, on my "Fists" I rolled a "Failure"! a "2" on 2d6. So I ruled that this meant the escape attempt failed and the "Getting Screwed" continued. 😉

So the next logical step was confinement. I had to think how I was going to get them out of this. I was tempted to spend a point of "Grit" to say that I had an appropriate spy gadget or device, one of the other uses you can put "Grit" to in "Magnum Fury". It would have been a very Bond thing to do. But, A) I wanted to save the "Grit". I felt like we were hurtling toward a final showdown, and I felt I'd really need it to ensure as much Success without Complication as possible, and B) it just didn't feel right.

Looking at her character sheet, the "Talents" caught my eye. This would be a GREAT time to start bringing them into play!

The "Sexy" Talent reads: "People attracted to your gender do little things for you all the time, without you even trying. If you spend 1 Grit you can get complete strangers to go out of their way, inconvenience themselves, or even get themselves in a bit of hot water just to please or impress you."

Sounded good to me, so 1 "Grit" spent to get him close enough to take him out. From there it was a couple more "Fists" rolls, I believe spending "Grit" to ensure complete Success, so I think I ended the scene with 6 Grit & the CF all the way up to 9 if I'm not mistaken!