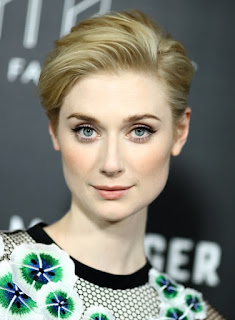 Emma knew there was no way to backtrack and make their way to the faux police car staged for her escape. They had to find another way out.

As 008 and the Russian pop-princess made their way through the smoke and fleeing bystanders they unfortunately ran almost headlong into one of the police officers that was already on the scene. For some reason, something about them raised his suspicion. He began asking questions, asking for ID and so on.

Drake again answered in perfect Russian. She showed her (covers) passport, that of an international lawyer. She feigned fear and panic, saying she was here to conduct business on behalf of a client, indicating Annuska. He seemed to take an eternity studying the documents and looking them over before waving them on.

Wanting to get out of sight and out of the area as quickly as possible, Emma led them down the steps of a metro station. She knew of a safehouse very nearby, just a few stops away, where they could hide, rest, and figure out their next move.

As the train roared into the station the three officers converged on them, shouting for them to stop.
As the doors to the train opened, Emma turned to face the two officers approaching from the metro entrance. The third came up on her left from the end of the platform, reaching out to grasp her when she struck, lashing out with an elbow to his jaw as the other two cops came within reach. As soon as her left elbow smashed into the first cops jaw, she immediately threw a boxing hook with her right to the cop on the outside, then lashed out with a push kick to the one in the middle, sending him sprawling.

Turning back to the first, she took him out with a Muay Thai flying knee strike, incapacitated the second with a jab to the throat, and left the third gasping for air with a heart punch as he struggled back to his feet.

Grabbing Tarasnova by the hand she pulled her onto the train just as the doors were closing. Before they could however, a fourth cop darted through. The train lurched into motion as Drake and the police officer faced each other. Would he attempt to apprehend her on a crowded train full of people?

008 had her answer as he lunged toward her. She met him, snapping out a quick boxing jab, rocking him back on his heels. She followed with a snap kick to the solar plexus. A heel kick hooked behind his ear as he doubled over. Finally, a chop to the back of the neck disabled him as he sank to his knees
.
She quickly looked around. The passengers of the metro shrank back in fear and surprise at the sudden violence that had erupted in their midst. Fortunately they were already at the next stop. Blake again took Annuska by the hand and pulled her out onto the next platform.

That was when it all went to hell as Tarasnova suddenly jerked free of Blake's grasp and tried to make a run for it. Emma's hand shot out, grabbing the collar of her coat and jerking her backward. "What the hell do you think you're doing!?!" she hissed as the pop star whirled to confront her angrily. "I don't know you! I don't know who you are or what you want from me!" she wailed "Just let me go! Those policemen..." 008 quickly interrupted in a low voice "It was necessary. You're in great danger. I need to get you somewhere safe".

She saw the cop on the platform at the same moment he saw her. They both stood frozen momentarily as their eyes locked. He moved first as he started trying to talk into he shoulder mike and fumble for his side arm at the same time.

Drake moved toward him with blinding speed, grabbing his wrist just as he cleared his holster and started to raise his weapon, turning as she pulled him over in a side hip throw, following through with an axe kick to the gut as he sprawled on the ground, and laying him out with an open hand palm strike under the chin.

Without waiting for further debate, Emma grabbed Annuska by the wrist and pulled her up the steps of the metro into the street. In the distance, she saw more cops running from the way they'd come back down the street in their direction.

The two women ran as 008 looked for some way to throw them off the trail. She spied an emergency room entrance down the block. Perfect. As they drew adjacent she suddenly swerved, pulling Tarasnova after her. They bolted through the ER and charged into the winding corridors of the hospital. She could hear pounding footfalls behind her as they rounded a corner. "Need to put more distance between us," she thought.

They ducked into a stairwell. Went up a floor. Quickly covered the width of the hospital. Took another stairwell down two flights to the underground parking, then exited onto the street.

Looking about warily she didn't see anyone, but just to be safe she did spot another opportunity to throw them off the trail.

Down the street a group of Russian youth were entering what appeared to be a nightclub, judging from the brief blast of bass that emerged from the door the bouncer held open for them as they entered.

Emma and Annuska quickly made their way to the club entrance. Drake was prepared to bribe the doorman or bluff their way in when he looked at Tarasnova and broke out in a wide smile, holding the door open wide for them to enter. Drake and Tarasnova's eyes met as the pop singer smirked a little and cocked a quizzical eyebrow. Rolling her eyes, 008 took her arm and they went in.

Throbbing music and writhing bodies surrounded them as the made their way into the club and onto the dance floor. Emma could feel the bass thrumming inside, was nearly blinded by the strobing lights. She had to fight to keep from being disoriented. Bodies moved and twisted all around them as they crossed the dance floor. Drake saw what she was looking for: the entrance to the kitchen.

Quickly ducking through, they passed through without breaking stride, ignoring the voices being raised in protest, and exited the back door, which had been propped open due to the oppressive heat in the club, and into an alley.

They were now two blocks over from where they had first exited the metro. And only a half block away from the destination 008 had been steering them toward all along.  Leaving the alley and walking briskly, Drake looked in the reflections of windows on the street for anyone following them, but no one seemed to be paying them any mind.

Annuska looked about in confusion as they entered a tattoo parlor. The owner, who was working on an arm sleeve for a customer, looked up as they entered, then stopped momentarily and came to speak with 008. A few hushed words later as certain code phrases were exchanged he motioned to a door in the back of the shop with his chin, then went back to work.

Emma guided them to the back of the room and through the doorway.

Posted by MoonSylver at 4:16 PM