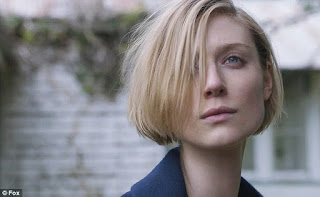 Emma Drake took stock of her surroundings as they moved out. The place smelled of mildew and damp, and had an air of general disuse. Based on the construction style she recalled something Annuska said earlier and made a guess as to where they were. The abandoned airbase. She concentrated hard, trying to recall the details of various blueprints of enemy military installations she had studied as part of her training. When she had it, she overlaid the map in her consciousness like her own personal HUD and highlighted the area where the communications and radio equipment would be. "Come on, let's go" she said.

As they made their way through the corridors of the base, a red light began flashing and an alarm began a klaxon call, echoing through the empty corridors. "Come on. Hurry" she told the girl as they began moving faster.

She heard pounding feet ahead of her. She motioned Annuska down and flattened against the wall as a group of thugs came around the corner ahead. The pistol in her right hand began barking, deadly accurate fire punching them off their feet.

From behind the she heard another group running. She motioned the girl to get moving as the pistol in her left rose and began spitting hellfire, picking goons off as they came into view.

They rounded the corner and she motioned the girl to stay put as she kicked open a door inset in the wall of the corridor on the right. She rolled through the door as the startled radio operators began to rise. Some of them had been given just enough warning by the gunfire outside and had drawn weapons, but it didn't matter as she came up tracking left, both guns raised and issuing flame, making them into jerking and twitching puppets before they collapsed.

When the shots ended Annuska looked inside, and Drake motioned her in, "Watch the door." she told the pop star as she put on a set of headphones and began working the dials. Tuning into a certain frequency that she knew was monitored for agents in distress, she began repeating a specific set of code numbers and words, requesting a black-ops team and an evac ASAP. She knew there would be hell to pay, but there was no other option. This one had gotten too damn hot. Time to get out of the fire.

As she pulled the headphones off two gunmen suddenly popped through the door behind them. Annuska began firing wildly, keeping the gunmen moving as Emma dove out of her seat, rolling, coming up firing, blasting both of the thugs against the wall to slide down in a red smear.

Another appeared in the doorway as she tracked back, punching hot lead into him as well as she grabbed the girl and the ran out the door.

Calling again to mind her mental map, Emma backtracked a route through the base to the hanger where they would have parked on arrival. Her intention was to grab a vehicle and blast their way out to safety until the extraction team got there. But as they arrived, Tarasnova stopped running. Emma turned to look at her. "Mickhael," she said. Drake sighed, "Of course." Well, she had told the girl they would see to it. Maybe it had something to do with the fact she had nearly been the Tarasnova's executioner. That the Russians had almost used her as their unwitting pawn to do their dirty work. Whatever the case, she agreed.

Referring again to her mental blueprint, Emma realized that the room they had held them in was really just a converted storage room. Base security was on another part of the grounds. She had no way of knowing for sure, but it seemed likely they would use it for long term prisoner holding. Such an area was going to be, by design, harder to penetrate. They would need more firepower. Fortunately, 008 also knew where the armory was. Assuming it was still supplied. She had a feeling it would be.

If it had been a fully functional and staffed military installation it would have been much harder. Given that it was apparently being used covertly, and only manned by a skeleton crew, made it much more achievable. Shoot the locks off the door, clear the entrance, move, shoot, roll shoot, shoot, keep moving. Drake almost made it look effortless.

A half a dozen bodies later, she found what she was looking for. Racks of AK-47's. Crates of magazines. Ammunition. She even found crates of F1 hand grenades.

She took one of the AK's. Stacks of loaded magazines. A bandoleer to hold them. She cross slung a satchel opposite, resting on her left hip. This she filled with grenades. She told Annuska, "Start running. Count three, then hit the ground and cover your ears. I will be right behind you. I'll take the lead. You stay low, behind me, and to my left. You match my pace. If we take any return fire, you hit the ground. Got it?" the girl swallowed hard and nodded. "GO!" she told her, and the girl bolted.

Drake pulled the pins on two grenades and dropped them in the crate with the rest, then ran like hell. Four seconds later, as she dove into the dirt right behind Tarasnova a tremendous explosion shook the earth as fire and debris skyrocketed into the air and rained all around them.

008 sprang to her feet, pulling the girl up. They ran for cover. Time to put some distance between them and their distraction, while they went to find Annuska's brother.

They moved carefully. Methodically. Taking cover where possible. Moving quickly when in the open. There had been any number of men who had ran past them on the way to the conflagration that had erupted. None took notice as they hid. When they got close to base security they encountered their first armed patrol. Emma Drake made quick work of them, stitching them with a figure-eight of 7.62mm manglers. From there she moved in a low crouch and advanced on the building, sweeping left to to right and back again, firing short, efficient bursts whenever opposition showed itself. Kneeling, firing, crouching, advancing, dropping spent clips on the move, slamming fresh ones into position as she advanced.

A grenade took out the front door. Another tossed through for good measure took out any opposition.
They entered the blackened, smoking ruin of the front desk area. She rolled another grenade against the door leading back to processing, blasting it to splinters. A quick look was met by a fusillade of gunfire and Drake ducked back. She saw several goons. She didn't see anyone that wasn't armed. Another grenade rolled into the room cleared it of resistance.

The door at the opposite end of the room led back to interrogation rooms, and finally the holding cells. It was blown partially off its hinges by the last grenade blast. 008 and the girl flattened against the wall and she yanked it clear of the door frame. Multiple bursts of fire swarmed through the opening. She waited for a lull in the shooting, then fired a burst of suppression fire as she risked a quick glance around the door frame.

A long hallway with doors on both sides that opened into the interrogation rooms led back to the next door, which in turn led to holding. Men occupied positions of cover on both sides at intervals down the length of the corridor, who began returning fire again.

Drake had yet to see a sign of anyone who looked like civilian. She believed they would have Mickhael in one of the holding cells behind the next set of doors at the end of the corridor, so she felt safe in risking another grenade. She didn't believe it would take them out. They were too scattered, and had some measure of shelter, but it would cover her advance and provide a good shock-and-awe factor.

She fired a long burst of covering fire from the AK-47 until empty. She pulled the pin and rolled the grenade through the open door frame, hearing a hoarse yell and men scrambling for deeper cover.

After the detonation she reloaded and waited two beats, then stepped boldly into the open. Still recovering from the blast, their jaws dropped and eyes bugged, stunned, at the tall blonde who wielded the assault rifle with such deadly precision. She advanced methodically, firing short, controlled bursts into each doorway. Left, right, left, right. glancing into each doorway as she passed to make sure the rooms were clear.

As the last defender fell she placed another grenade against heavy door that usually required one to be buzzed through. The exploding grenade sufficed just as well. A small chamber lie on the other side, with a second security door beyond. Her last grenade took care of it. She peered through the acrid smoke to see what opposition was on the other side.

A small room, a couple of heavy desks, a row of four holding cells behind them waited in the other side. The last two hardmen had split up, each crouching behind a desk for cover. As she ducked back from the fusillade they unleashed through the door she caught a glimpse of a young man with dark hair in one of the holding cells at the far end, holding the bars and straining to see what was happening.

Closing her eyes for a moment and taking a deep breath, 008 dove through the door, tucking into a roll and coming up firing on the hard guy to the left. The one on the right tracked her firing a ragged burst that went wild as she spun and emptied the remainder of the clip into him.

Annuska ran to the youth in the back cell crying "Mickhael!" as Emma Drake searched the fallen gunmen, securing a set of keys that released the teenager from his cell, allowing the two siblings to tearfully embrace.

008 cocked her head, hearing the faint sound of helicopter blades in the distance. She motioned for the brother and sister to follow her. Carefully, they made their way through the wreckage of what had been base security. Drake watched  from the shadows inside the building as a pair of black helicopters with no markings descended quickly on to the lawn. Black uniformed soldiers rapidly fanned out, securing the area.

Emma motioned for the duo to follow, and exited slowly, hands raised. They were quickly secured by the black garbed soldiers, and taken on board the lead chopper. Drake recognized the commander of the extraction team, a tough ex-SAS officer by the name of Dorsey. "Bloody Hell, Em. What'd you do, declare war on Russia?" he queried incredulously, motioning out of the chopper at the burning armory, the bodies scattered on the lawn.

"No. War's over. I won." 008 said tiredly, with a hint of a smile, as she regarded Annuska and Mickhael Tarasnova and the chopper lifted off.

Posted by MoonSylver at 7:23 PM