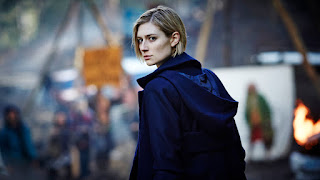 The next morning, 008 again studied the street as carefully as possible from the window, looking for anyone watching. When satisfied that she could see no one, she and Annuska Tarasnova prepared to depart. The tattoo parlor wasn't open yet, so Emma Drake made sure to disable the alarm with a code that was known to her for safe houses, then they let themselves out the side door, locking it behind them.

On the street, 008 again scanned intently, looking for any signs of surveillance. She locked eyes immediately with a carload of hardmen on the opposite side of the street, just far enough down the block to be out of the field of view from the window above. The safe house had been blown.

With no hesitation, Drake launched into action, running directly toward the car full of goons. She could have pulled the Glock-19 and made quick work of them, but she wanted to avoid causing another panic. Gunfire, even silenced, was going to bring the police that much faster. Corpses tended to do that.

The thugs on the far side of the vehicle had been quickest to respond, throwing open the doors and starting to exit first. Without breaking stride, Emma threw herself headlong into the air, tucking into a roll on the roof of the car, lashing out with both feet at hard cases', smashing them both in the face.

As she dropped to the street on the opposite side of the car, the other two thugs on the side facing the tattoo parlor had just gotten out.. Now as they tried to whirl around, one of them talking into a radio and the other opening his jacket to go for his pistol, 008 grabbed the edge of the door frame and swung herself feet first into the car. She thrust both feet through to the opposite side, catching the hard guy up front and blasting him sprawling into the street.

The fourth guy had managed to claw out some hardware as Emma grabbed his wrist and pulled it into the car, pulling the door shut hard to slam on his wrist, breaking it with an audible snap. He howled in pain and dropped the gun as she threw the door open again and launched a high roundhouse kick, catching him in the temple and dropping him in a heap.

She sprinted back to Annuska, grabbing her arm and pulling her along in a run as a second group of thugs came around the corner behind them. Emma saw a city bus on the corner and they jumped aboard. The doors started to close when the fastest of the KGB agents thrust himself through and tried to board. Drake nailed him with a straight front kick, sending him flying backwards as the doors closed.

"Drive!" she commanded the bus driver, and the bus pulled away from the curb. He looked at her with a mix of astonishment and curiosity. Apparently he expected an explanation. "Her boyfriend," 008 said, indicating her companion "He beats her." The driver grunted, apparently satisfied.

When the bus made its next stop around the corner and a few blocks away, the two women did their best to blend into the flow of passengers getting off and on. Drake pulled Tarasnova along as they ran to the opposite side of the street and hailed a taxi.

Emma told the driver to just drive around for a while. She scrutinized the flow of traffic behind them intently, looking for signs of pursuit. When satisfied, she gave the driver a destination, "Kutsevo Cemetery, please."

Annuska looked at her with undisguised confusion. "We have a numbers station there in the caretakers cottage" 008 murmured in a low voice. The blank look the pop star gave her told Emma that she had no clue what that was. "A short-wave radio transmitter, where we can broadcast coded messages to my people" she muttered, keeping her eyes fixed on the driver. He gave no sign that he was aware of the conversation.

Shortly, they pulled to a stop in front of the large iron gate to the cemetery. They paid the fare and stood in front of the gate watching as the cab drove away. "Come on, let's go." Drake said as she moved toward the cemetery gate. "No." Tarasnova said, not moving from where she stood,

"No? What the bloody hell do you mean?" Emma snarled, "We don't have time for this." Annuska stood her ground, refusing to be cowed "Not without Mickael." she said stubbornly. Drake frowned. "I told you we'd see to your brother." She did her best to stay calm and keep her voice level. "But, we have to contact MI-6. I need to appraise them of our situation. Of what's changed."

Tarasnova shook her head. "If you contact them, you'll have to leave. They'll want you out of Russia after all the trouble that has happened. Mickael comes first." 008's scowl deepened "Damn it, we don't have time to argue about this. We aren't safe out in the open like this." Annuska stubbornly shook her head "We find Mickael first. Then we call your people."

The argument was rendered moot by the screeching of tires. Two cars appeared from opposite corners, skidding to a stop at angles on each side, bottling them in. Emma grabbed Tarasnova by the arm and made a break for the cemetery gates, Locked. It was too early. The cemetery wasn't open yet.

Armed gunmen emptied from both vehicles, taking cover behind their cars, covering them and yelling for them to drop their weapons and get down on the ground.

008 knew she had no choice. Alone, she might have been able to shoot her way out of this. But with the girl at her side, she couldn't. There's no way Annuska could avoid getting hit in the cross fire. Carefully removing her pistol from the shoulder holster with two fingers from her left hand. she lay it on the ground and sank to her knees, hands behind her head, as the enemy closed in on them.