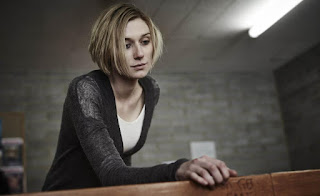 As soon as they had Emma Drake they zip tied her hands behind her back and thrust a burlap sack over her head. Rough hands seized her arms, guiding her to one of the waiting cars, shoving her head down hard to duck as she was thrust unceremoniously into the back seat, Hard figures also entered on either side, pinning her in the middle, and the car took off.

The car ride lasted what seemed like a long time. There were many turns, no doubt to throw off her sense of direction. It worked, as she had no idea which direction they were headed when they finally settled into a straight route. At some point she assumed they exited the city and entered the country, as the faint noise of city life outside the car disappeared.  No one spoke inside the auto. The only sound to be heard was the steady hum of the engine.

Eventually the car slowed, made a turn and drove a stretch before stopping again. Drake could hear the window power down, feel the breeze blow in from the outside, smell fresh air even through the sack on her head. She believed they were in the country somewhere outside Moscow. She heard the driver exchange a few words with someone outside, but couldn't make out what they were saying. She heard a faint rattle of metal-on-metal like a length of chain, then a slow squealing rattle, perhaps a gate being opened, and the car moved forward.

She could feel more than anything when the pulled into some kind of large cavernous structure, and could tell by the change in lighting when they pulled out of the sun outside and into cool darkness.

The car stopped. Doors opened and men got out. The rear doors of her car both opened and the bulky shapes on either side of her were suddenly gone, then her arm was grabbed roughly and she was pulled out of the car.

She stumbled, trying to find her footing, off balance. Vice-like hands grabbed her on either side to steady her. She could feel someone standing before her. They grabbed the sack and yanked it roughly off her head. She couldn't see well after having it on her head for so long, but she didn't wait. This might be her only chance at escape.

She immediately pistoned a knee up into the groin of the figure in front of her, causing their breath to explode outward in a massive "whoof!". She stomped down on the foot of the one to her right, sending him hopping, swung the knee around again, ramming it into the gut of the one on her left.

Someone else stepped up, and she heard the crack and sizzle of a stun gun a split-second before it touched the side of her neck and she felt the voltage flow through her, then she knew no more.

Sometime later, consciousness slowly returned. As her eyes opened, and focus blearily came, she could see she was in a room made of concrete block. It was mostly dark, the only illumination being provided by what seemed like a lone bulb overhead. The chair she sat in felt like wood. It was hard. She tried to raise her hands. They rattled and jerked short. Her wrists were fastened to each arm of the chair by a pair of handcuffs. As she began to stir she could feel someone behind her, sitting back-to-back. She heard Annuska tentatively say her name, then a harsh male voice barked out from the shadows for silence. Looking about she could see two large shapes in opposite corners, one by the door and the other in the corner nearest them. Guards.

She sat for a long while, breathing deeply, flexing each of her muscles in turn, trying assess if there was any damage, getting her blood flowing, letting the cobwebs clear from her brain. Preparing. She tested the chair slightly, tipping the front and back legs just a little, seeing if it was bolted down. It wasn't. Good. Her feet were not bound either. Even better. Very sloppy, but she wasn't about to complain.

Other than an occasional slight rustle from the guards as they shifted and moved, her own deep breathing, and the shallow, rapid breaths of Annuska behind her there was no other sound.

When she felt as ready as she ever would she spoke to the closest guard. "Do you have a cigarette comrade?" she asked in a throaty voice, assuming a facade of casual sensuality "No smoking in here." he answered gruffly. "I won't tell if you won't." she drawled, adopting just a hint of a smile and arching one eyebrow. He swallowed. "Please? You wouldn't deny me any last...pleasures, would you?" she teased "Give it to her Yuri. A cigarette, that is," the second guard said from behind her with a smirk in his voice.

She gripped the arms of the chair as he approached, drawing a pack of smokes. He stood in front of her and put it between her lips as she gazed up at him, never breaking eye contact. He produced a lighter and bent slightly to light it for her.

Emma Drake surged out of the chair, headbutting Yuri hard on the bridge of the nose. Cartilage smashed and flattened and blood sprayed as he cried out and flailed awkwardly backward. She whirled, swinging the heavy wooden chair as hard as she could, and it smashed into splinters over his back as he crouched clutching his destroyed nose.

The other guard lunged forward pulling his gun as 008 moved, gripping the two arms of the chair. She swung the right in a vicious arc, connecting in an audible CRACK, like a home-run hit. Then the left crossed back over, making contact as he slumped that direction, knocking him the opposite way.

As he dropped to the ground the door sprang open and two armed gunmen tried to enter. Before they could clear the door, Drake hit it with a kick, smashing it on the arm of the lead gunman as he entered with his pistol thrust out in front of him. He howled and dropped the gun as she grabbed his wrist and pulled him sprawling into the room and then jumped and grabbed the door frame, swinging feet first into the second gunman, sending him flying into the opposite wall of the hallway outside the door.

Emma crouched and quickly searched the guards, procuring a pair of keys. She undid the cuffs on herself and Annuska then snatched up the pistols of all four goons. She gave one to Annuska, stuck one in her waistband, and carried the other two. Together the two women exited into the hallway.