"The Vigilante Hack" is HACK-TASTIC! 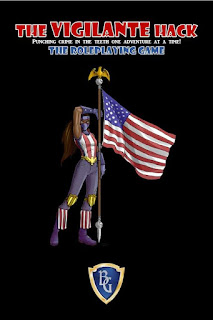 Love the cover for starters.

Once again, it's been a while since blarging. All the usual reasons, so no need to dwell on that. What I wanted to talk about is a little game that has motivated me in a big way: "The Vigilante Hack" by Eric Bloat from Bloat Games.

"The Vigilante Hack" (TVH) is a small indie RPG based on "The Black Hack" (TBH) by David Black. I'd heard of TBH when it made its big splash a little more than a year-and-a-half ago, but I didn't pay it much mind. "Another retro-clone" was my thought. Then I heard some talk of its Usage Die mechanic, thought "neat", and still didn't pay it much mind,

Then a few months back, TVH dropped. I was taken immediately by the stark simplicity of the cover, which I found quite striking. Reading the description, I kinda went "eh". Though I liked the sound of it, at the same time I have plenty of Supers games, and this one didn't sound like it did anything new or different than the others (and to be honest, it really kinda doesn't), so I didn't check it out right away.

Apparently I just wasn't ready at the time, or the mood wasn't right, or whatever. But the exposure must have went in by brain and stuck there, waiting for the right moment. I got to thinking about getting a Supers game going again, as I often do, but couldn't settle on a particular game, a particular sub-genre or setting, etc, also as I often do. Then I remembered TVH and a little something clicked. I looked it up on DriveThruRPG, saw that A) it had been marked down to a measly two bucks, and B) that it already had support material by way of a GM's Guide, "A City Full of Sinners" (aCFoS), also two bucks. For $4, two books? Why not? 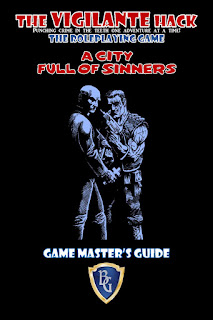 On the surface, they're deceptively simple. A mere 37 pages for the core book! Another 37 for aCFoS. 74 pages combined. Just 10 pages more than the sixty-four pages of Moldvay's Basic D&D, which is a high point for me in lean, mean, succinct game design, so this is not a bad thing.

The rules are pure, old school, D&D stripped down to its core for task resolution and combat, and removing the clunky sub-systems, thus making a small, lean rule set even smaller and leaner, & streamlined even further, with a few innovations (like the aforementioned Usage Die) & modern flourishes (Advantage/Disadvantage a la 5e). This is also not a bad thing, as reading it reminded me of all the familiar things that I LIKE about old-school D&D, familiarity and ease of play being among them.

One of the areas I think the game really shines in is in its look, presentation, and style. It has a certain feel, a certain vibe about it that sells the premise of the game.

Speaking of which, let's talk about the premise of the game:

"The Vigilante Hack is not a superhero game. While yes, some vigilantes in The Vigilante Hack are considered heroes and some wear costumes, including capes and masks, there is nothing “super” about them. They have no X-ray vision. They cannot run faster than cars. They cannot leap buildings in a single bound and they are not bullet proof. The vigilantes in The Vigilante Hack are normal people, the same as you and I, who have become fed up with the lawless individuals, thugs, organized crime and villains and have decided to do something about it! They have trained hard, sometimes to the point of obsession, and have struck back at those very people who are ruining their city. Think Batman, not Superman. Think The Punisher, not Spider-Man. Think Batgirl not Wonder Woman. Being a vigilante can be a thankless and even deadly calling. You may get arrested. You may pick a fight that you can’t win. You may find yourself looking down the barrel of a villain’s gun or you may even cross the line of right and wrong and become the exact thing that you started out trying to stop."


If this is what you want, this is what the game delivers. And that's ALL it delivers. Instead of trying to be all things to all people, it does the one thing it does, and does it simply and well in a rules-lite package.

This was what set off the light bulb for me: I didn't want to play a SUPERS game, I apparently wanted to play a VIGILANTE game. A MASKED HERO game. A COSTUMED ADVENTURER or MYSTERY MEN game. Calling it a "Supers" game is really a misnomer.

And by narrowing the focus, I found this liberating. When contemplating a Supers game, I think I was overwhelmed by choice . By limiting the focus and saying "There are no superpowers. Everyone in this game is a regular human", I suddenly felt relieved. Even if I had attempted to play this kind of game with other rule sets, it would have felt like I was missing something, both because of how those games scale to handle superpowers, and just the fact in the back of my mind I would be aware that they're there. By saying "This is not what this game is about" it suddenly made me feel OKAY about it. It gave me permission to play this kind of game. By eliminating all other choices it set me free.

This is "Watchmen" without Dr. Manhattan. It's "Kick-Ass" by Mark Miller. It's the DCU if it only consisted of The Batman and Family, The Green Arrow and his related characters, and so on.

Again, this is not a bad thing. It seems to have resonated with me in some of the same ways that recent shows like "Daredevil" and "Arrow" have with viewers. It levels the playing field between the heroes and the criminals they will do battle with. Makes them more of a challenge. Suddenly the common street criminal or mobster seems like more of a threat. I like that. It also brings the genre back to its pulp adventurer roots in a way I also like.

So all that said, I've finished the two projects I was working on. The first was adapting a set of (hopefully easy to use) but very detailed Hand-to-Hand and Gunfire Charts to add flavor to (modern) d20 combat. The second I'm very excited about, as it's a project I've wanted to tackle for a while. It's an adaptation and expansion of various Patrol and Crime, charts, both published and online, to give a Patrol System for the types of situations a crime fighter would encounter on their nightly patrols.

With the completion of these, I'm ready to start my campaign! Speaking of which, next time I'll share the details of the campaign setting I've brainstormed thus far. I'd also like to share a few other Black Hack games, resources, and "Additional Things" that I'm adding to season TVH to taste. 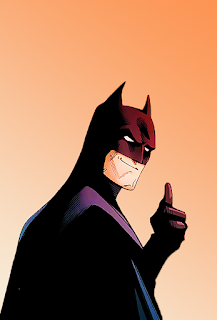 Posted by MoonSylver at 5:45 PM