Spring-ing Back Into (Superhero) Action!

It's been a rough year for this Blarg-edy Blarg'er. Work upheaval & some (minor) poor health throughout the year didn't leave me with a lot of time. Or desire to "blarg" about gaming, or much of anything else. For a long while I didn't do, or even think about, anything gaming related.

BUT, as situations improved, I started thinking, then tinkering, & finally, feeling the urge to share my thoughts again! SO, here we are!

Oddly enough, it was just a little over a year ago that I made my LAST post here at the Blarg, on the same subject I'm tackling again: Superhero RPG'ing

One of the issues I'd been struggling with a bit in the past while working on the Super Hero Open World Sandbox Hexcrawl series of posts was which rule set to use. As I'd covered in a previous post I was a "Champions" man first, and then a "Marvel Superheroes" guy later. While I would be fine with running either, at the same time I still had issues with both. Still, my love for both REALLY made it difficult to entertain the thought of a new system.

But in this latest bout of spring-fueled mania, I decided to take the plunge. But which one? "Icons" , "Supers" , Capes, Cowls, and Villains Foul were among those that had my interest. 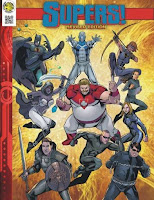 "Icons" in particular I'd looked over, and had things that left me cool towards it, despite the fact it seems to be the most popular of the new breed Supers RPG's of the rules lite variety. (Something about the "FATE" system just doesn't seem to click with me I think).

After reading up on all of them, I ended up settling on "BASH!" (as I'm sure you already figured out from the lead-in image at the beginning of this post...)

I'm still in the process of reading it, but so far my thoughts are: "Holy procrastination, Batman! Why did I wait so long?!?"

It's been out long enough that there are plenty of reviews that can do it better justice than I, (especially since, as I said, I'm still reading it), but I'll happily share what I'm digging about it thus far:

If I had any one "complaint" it might be that I really wanted something that had BOTH Random AND Point-Buy Character Building. HOWEVER, as easy as character building IS in this game, it should be a SNAP to randomly generate characters in, say, Marvel for example, and then port them over!

So, overall I'm REALLY pleased thus far. Maybe now I can put all that prep last year to use!

Posted by MoonSylver at 8:23 PM