It's spring, when apparently a "young" man's fancy turns to thoughts of superheroes again. In a previous post on Superhero Sandbox Hexcrawls I posted a number of links to some of the various random generators I've come across. You can still refer back to that post for a complete-ish list.

Be that as it may, I was going through my folder of them today and uploaded all of the ones that I find most useful to my Google Docs account so that I have easy access to them on all my devices.

Since I did this I thought it might be nice to go ahead and hand out links for them as well, so here are all of the free ones that I like the best:

All of these are pretty much system agnostic, or can be made as such with very little effort. Some of these duplicate that aforementioned blog post, but I thought it would be nice to have them all together in one spot.

Speaking of random tables, I was reminded of a product I meant to check out in this post for solo supers gaming, Comic Book Adventures.

Basically, it's a toolkit/guide book to allow you to run sessions of their Pathfinder supers game Heroes Wear Masks in conjunction with the various Comic Book Adventures Mission Books, as featured on the Core books page listed above.

I decided to splurge on the Core Book at least and get a feel for it/see how useful it is. I have mixed feelings on it. It's an interesting product and system. If one were to go all-in for HWM + the Mission Books I think you could have a lot of fun with it.

Outside of that however, its usefulness becomes somewhat more limited. It does however have a lot of neat random tables, and an interesting structure for patrols + adventures, creating your own comic book "issue". I would hesitantly recommend it if you keep in mind those limits and/or don't mind a bit of "kit bashing" to adapt it to your needs. I would strongly suggest using it with one or more of the above generators, as this product is really designed more to produce patrol or side missions, leading into your "main" missions (ie the Mission Books.

In the interests of completeness I'll go back & add these into the Superhero Sandbox Hexcrawl post as well for reference.

While I'm talking about Supers, my recent love affair with Monsterhearts turned me on to the Powered by the Apocalypse engine to the point I started looking into other games that use it. One that I picked up is Worlds In Peril 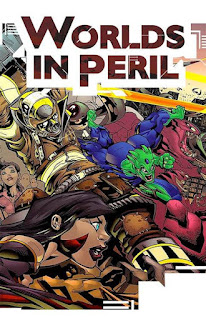 It's a beautiful, lavish, well written, colorful tome. Unfortunately it makes me crazy in a way that Monsterhearts never did with it's simple, clear, and concise writing. It takes what should be a simple system and makes it hard for me to understand.

Regardless, here is the thing that REALLY drew me to it: the way it handles Social Mechanics (a la Monsterhearts "Strings") in a way that is VERY thematically appropriate: Bonds. THIS blog's review describes them much better than I could have:

There are a few moves where Worlds in Peril really shines. First, lets talk about the Fit In move. Your relationships, called Bonds, can be used to boost dice rolls and represent how those NPCs will react to you. The Fit In roll is triggered when you spend time cultivating your Bonds: creating new ones or increasing the strength of existing Bonds. In addition, Fit In is the only move that allows you to recover from conditions that are inflicted on you. So dealing with your normal life is vital – it’s the primary way you ‘heal’.

I like this. A LOT. It puts me in the mind of Spider-Man/Aunt May, how he constantly draws on her for inspiration in tough circumstances, lets her down in his "real" life, then has to mend fences (again). And it does it in a mechanical, elegant way that weaves it into actual game play, not just lip service.

It's kinda like what Marvel Super Heroes was doing with Karma earned not only for Super stuff, but real life as well, but taken to the next level.

If I can't get my head around WiP better, I'm SERIOUSLY tempted to house rule this into Marvel in some way. Maybe all Kama earned for Super stuff goes into a "pot", which you only get to claim if you earn "civilian life" Karma? If you LOSE civilian life Karma you can't claim any earned Karma this session (thus forcing you to earn some civilian life Karma NEXT time)? I'd like something more elegant like the way WiP handles Bonds, but those are some quick thoughts for now.

Well, that's all for now. Until next time... Posted by MoonSylver at 3:57 PM